The "Borgia's Castle" or "Borgia's Fortress" is the main monument of Nepi. Once owned by the important Catalan family is, today, the result of different remakes which testify the historical continuity of our wonderful town.

The Borgia’s fortress (Forte dei Borgia), tied to the powerful Catalan family, represents the historical richness and continuity of Nepi. Borgia’s Fortress is certainly the most important among the monuments in Nepi.

In 1962 it was donated to the town by the family Sili. The fortress was crumbling. A twenty years long restoration made the castle again available to the citizens and tourists. 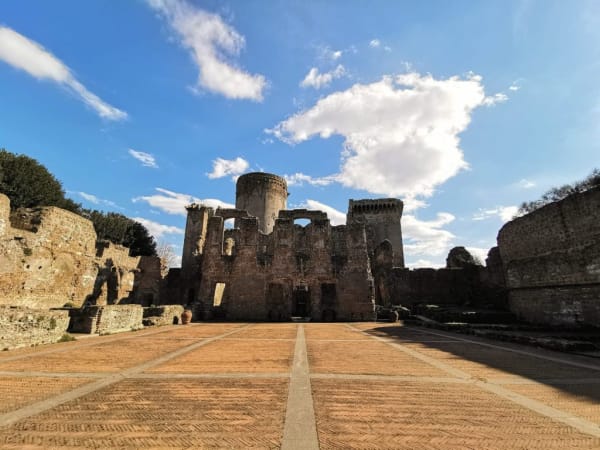 The original core of the fortress lays its foundations on a roman ancient castle which defended the western part of the town. The roman round arch gate with its 15 peperino voussoirs stands in the basement of the building. The “basolato” ruins of the ancient roman Amerina Road lay around the gate.

During the Byzantine age the town was an important center along the Amerina Road, but as today there are no building from that period.

A trapezoidal tower was built between the 12th and the 13th century. The tower is the original core of the fortress. When Alfonso Borgia became Pope in 1455 Nepi experienced a period of radical urban transformations and the tower saw its first expansion.

The fortress experienced important changes between 1479 and 1483. The works were led by the master Antonio Fiorentino, recognized by many as Antonio Sangallo Il Vecchio ("The Old"). The fortress was provided with many residential spaces. These changes were realized during Rodrigo Borgia’s time, who received the property of Nepi in 1479; the property was confirmed by Innocenzo VIII papal seal in October 1484.

The Rodrigo Borgia’s coat of arms in the tower records the first phase of the works. In 1499 other works were commissioned to make the fortress more inviting and elegant for its new owner: Lucrezia Borgia.

Probably before this date rectangular surrounding walls with four circular bastions were built for defensive purposes. After the erection of the wall, the ancient roman gate was closed and a new entrance door, the present Porta Borgiana, was built.

Rodrigo Borgia who became Pope 1492 as Alessandro VI, decided to donate the fortress of Nepi to Ascanio Sforza as a reward for his support to the election. Ascanio Sforza owned the castle until the summer of 1499, when the contrast with the Pope obliged him to return the castle to Francesco Borgia.

Alessandro VI gave to his daughter Lucrezia Nepi’s domain, which included also the surrounding lands besides the fortress. Lucrezia settled definitively in Nepi only in August 1500, after her husbands Alfonso D’Aragona death. She grieved in Nepi for one year with her son Rodrigo. In 1501 she married Alfonso D’Este and moved to Ferrara. 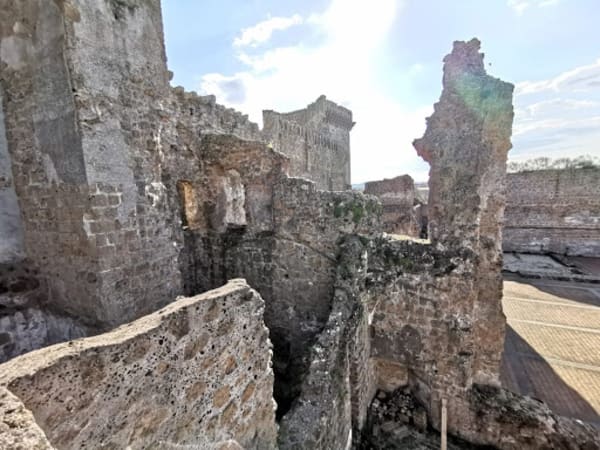 Bernardo Accolti and the new works

Giulio II, the successor of Alessandro VI, gave Nepi to the cardinal Ascanio Sforza. The historical records indicate that the construction of a new part of the fortress started in 1513. The building had a residential function and joined the trapezoidal tower to the circular tower.

Today only a small part of this building remains. The facade of the palace is characterized by many large windows which enlightened the first two floors.

The discovering of a stone coat of arms allows us to date the completion of the residential building in Bernardo Accolti time. He was know as “l’Unico” (the Only). He was an eccentric and well known poet. He ruled over Nepi and owned the fortress from September 1521 to the beginning of 1535.

After conquering Nepi from Bernardo Accolti, Paolo III in 1537 created the Duchy of Castro and Nepi. He donated it to his son PierLuigi. During Farnese’s dominion, the city experienced important changes. New roads were built, squares were enlarged, and the Fortress was improved.

The architect Antonio da Sangallo il Giovane designed the most important works, such as the Town Hall and the San Tolomeo church, which were unfortunately not finished. 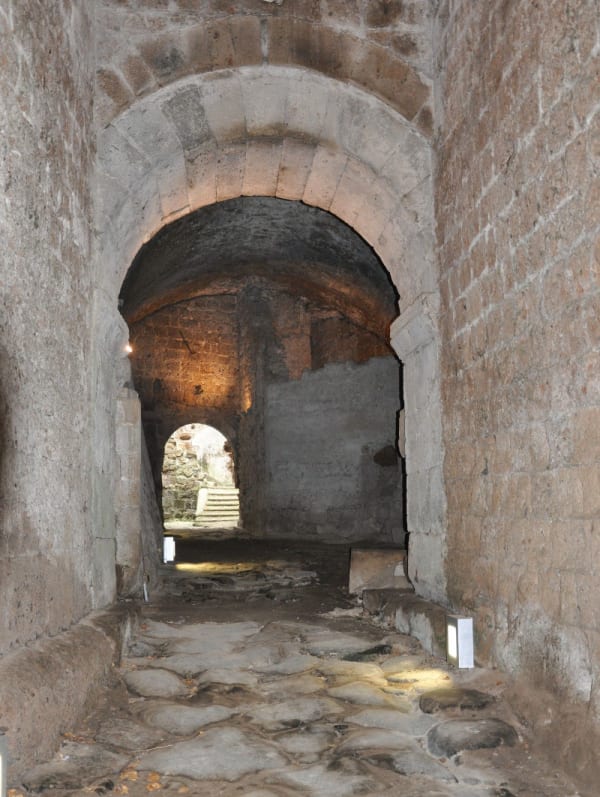 The main work of Antonio da Sangallo are undoubtedly the city walls. The walls surround the western part of the hill where Nepi stands and they present two imposing polygonal bastions.

These walls made the Borgia’s Fortress the core of an architectural ensemble extending along the western part of the town.

To defend the gates of the town (Porta Romana and Porta Nica) cannons, culverins and harquebus were used. Porta Romana was decorated with the Paolo III coat of arms.

Carts and carriages entered through the central entrance, while pedestrians and horses could enter in the town through lateral posterns. 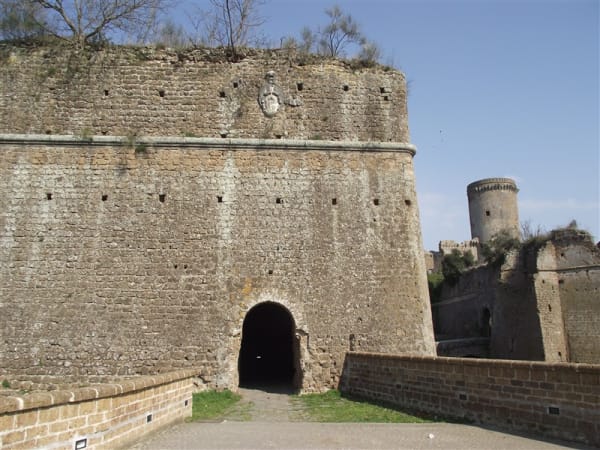 Some moats were built around the wall and were flooded with the water from the Rio Puzzolo and the Rio Falisco, whose water was also used to activate the mill placed in Via della Mola.

After Pier Luigi Farnese departure in 1545, Nepi became property of the Apostolic Camera, which donated the fortress to private owners while keeping the right of using it in war times.

In this moment begins the progressive decay of the fortress culminated with the fire in 1798 caused by French troops. 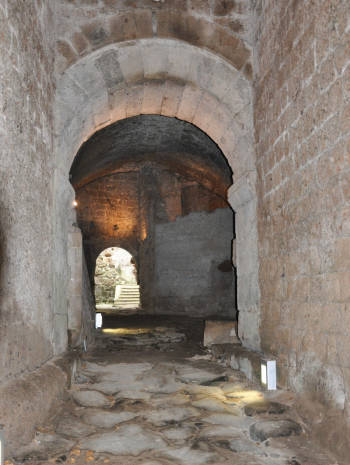 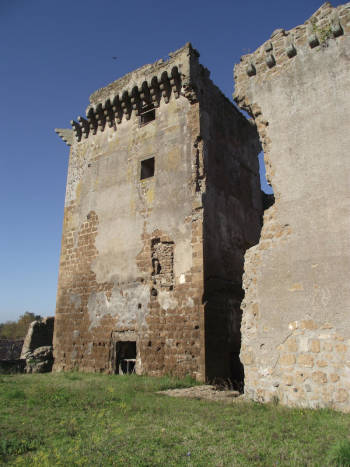 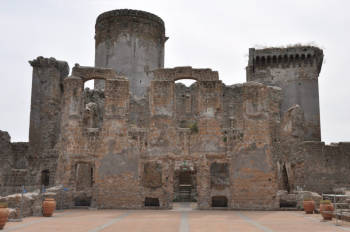 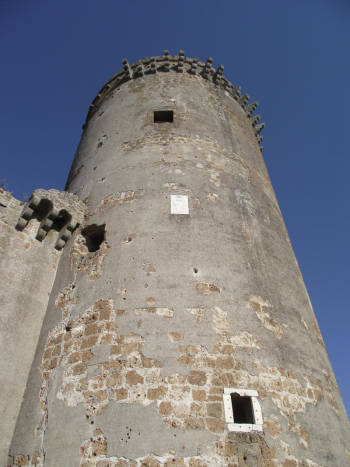 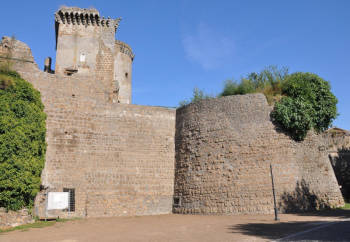 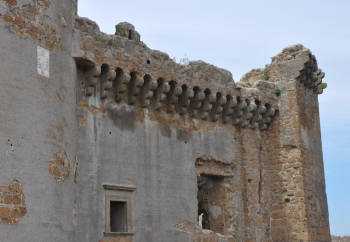 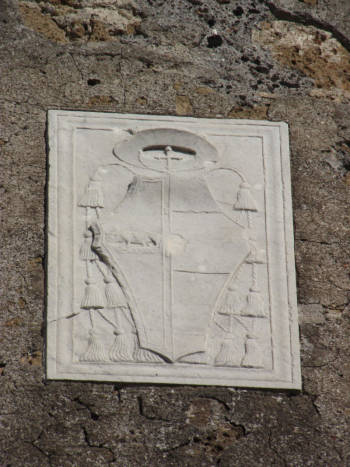 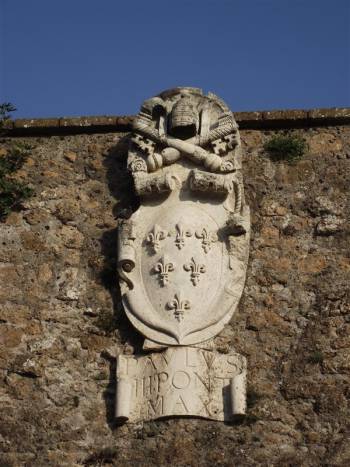 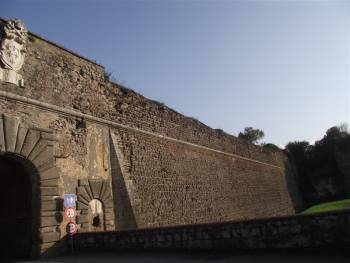 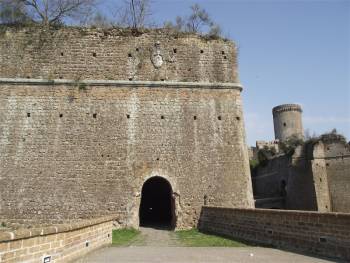 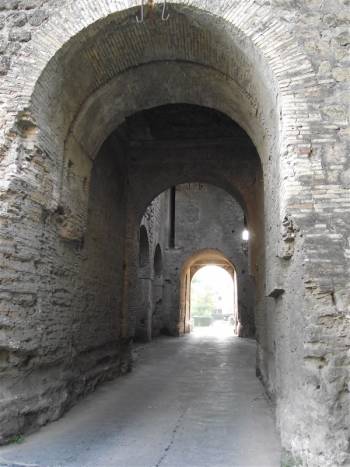